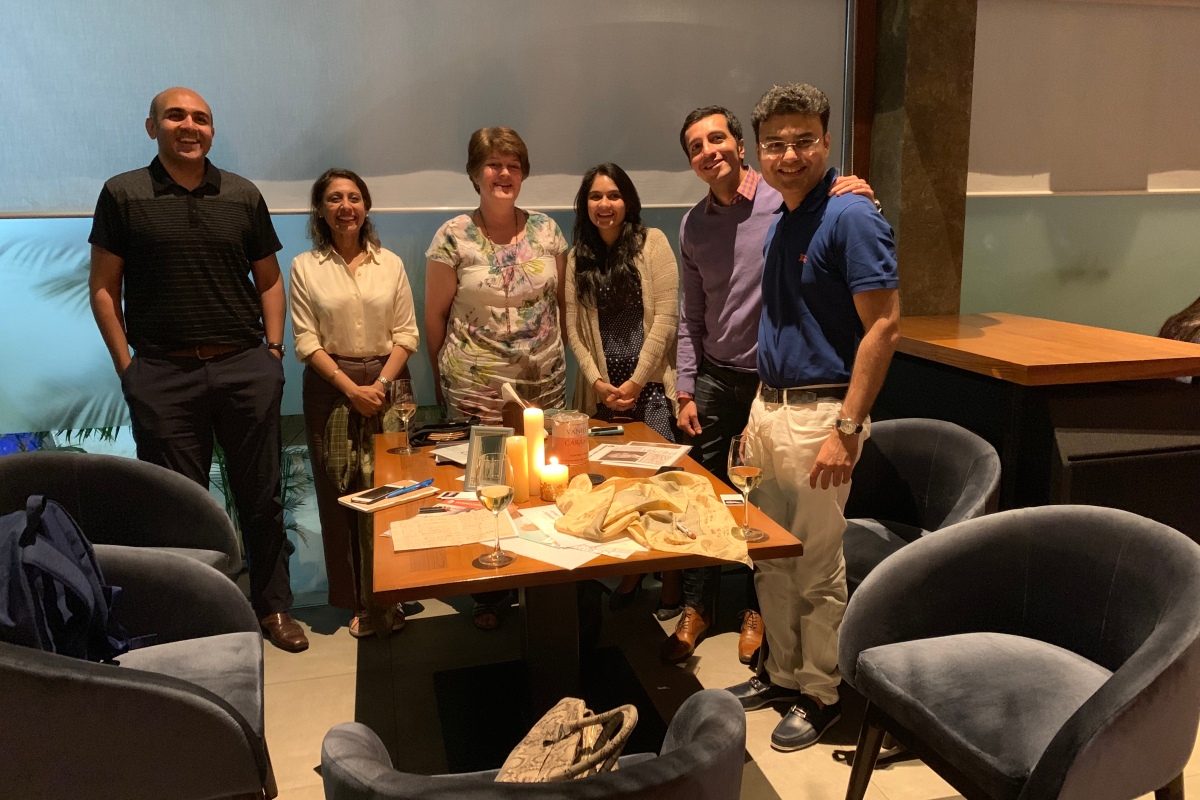 I love Mumbai, probably partly because it is the Indian city I have spent the most time in so I have been looking forward to stopping here. Harry did not come to Mumbai, but as I do work with OSCAR Foundation and NGO based here if I was going to be in Delhi, I decided to hop across India to Mumbai. It also gave me an opportunity to meet with Mumbai based alumni.

So it was that I was looking forward to an evening with a mix of I-House NYC and ISH (International Student House London) alumni at a new bar down in South Mumbai.

It was a very wonderful evening but also saw my first logistical bump on my trip so far. I lost the GOATs! Goats is the name given to alumni from ISH. The name Goats Club came from a comment by an African student who said to Miss Mary Trevelyan founder of ISH “Oh, we thought you were dead! Without you we should all have been lost goats!

I was expecting some 8-10 Goats and as the NYC I-House alumni arrived and found me there was a distinct absence of the ISH alumni. Even allowing for Indian timekeeping norms and drop outs that always happens this was most odd. At the time of writing I am still waiting to find out if they found each other and not me and were still able to have an enjoyable evening.

Amongst the NYC I-House alumni was Nidhi Shah, who actually only lived at the House for 2 months, but even in that time had developed such a love for the place was willing to be in correspondence with me over the last 9 months about the event! Along with Sid Mehta, who is now the World Council Alumni member for India, Nidhi and I were due to meet back in July when I was over but that was scuppered by the engine on my BA flight breaking and spending 18 hours in Azerbaijan. So when I finally met Nidhi it was wonderful. She also bought the Mumbai candle a very lovely Vanilla scented one which will travel to Beirut.

Karan Bhosale, Manjeet Kripalani and Rohit Bijlani joined us to and covering various eras of the House shared their experiences and how they ended up living at I-House. The continued link with I-House friends around the world was again a common thread and the deep emotional attachment to the House and everything it stands for also resonated. So much so that much of the evening was spent in serious discussion about how an International House could be built in Mumbai and how right the time is for doing this. So watch this space, with the determination, breadth of skills, contacts and persuasive powers around the table, I think it might just happen!

Anna and Anna – Karan Bhosale – Karan was going to study at Columbia Law school and he needed somewhere to live. He met two Anna’s and they were looking for a 3rd person to join them in a flat share, so Karan agreed to take the spot. Almost as soon as he had done so, he saw I-House NYC mentioned on the Columbia paperwork and began to investigate. He saw the House had a canteen and that set him thinking. He had not really had to cook for himself thus far and he wondered how catering would pan out if he shared with Anna and Anna as he could not imagine they would cook for him. He looked into the House further and found out more about the facilities and programs and suffice to say that Anna and Anna were kindly given the news that he would be living at the House and enjoying his catered meals there.

A musical resume – Sid Metha – Sid described his arrival at I-House starting at a music concert. He went to watch Kinan Azmeh https://kinanazmeh.com and on Kinan’s bio it said that he had lived at International House whilst studying at the Juilliard School of Music. Sid had never heard of I-House and so wanted to find out more. At the same time the name came up not the paperwork for his Columbia Law school housing. On arriving in NYC he looked at the Columbia accommodation options and I-House and of course I-House won!

Harlem celebrates – Rohit Bijlani – Rohit was remembering the Obama election that happened whilst he was in the House. Nearly everyone was squeezed around the TVs to watch as the results came in. When it became apparent that Obama had won. Groups started to think about leaving the House to see what was going on. Rohit and his friends decided that rather than head to Times Square they would walk into Harlem. The scene was jubilant with people out on the streets, dancing on bus stop roofs, up trees and on cars. Certainly a night to remember.