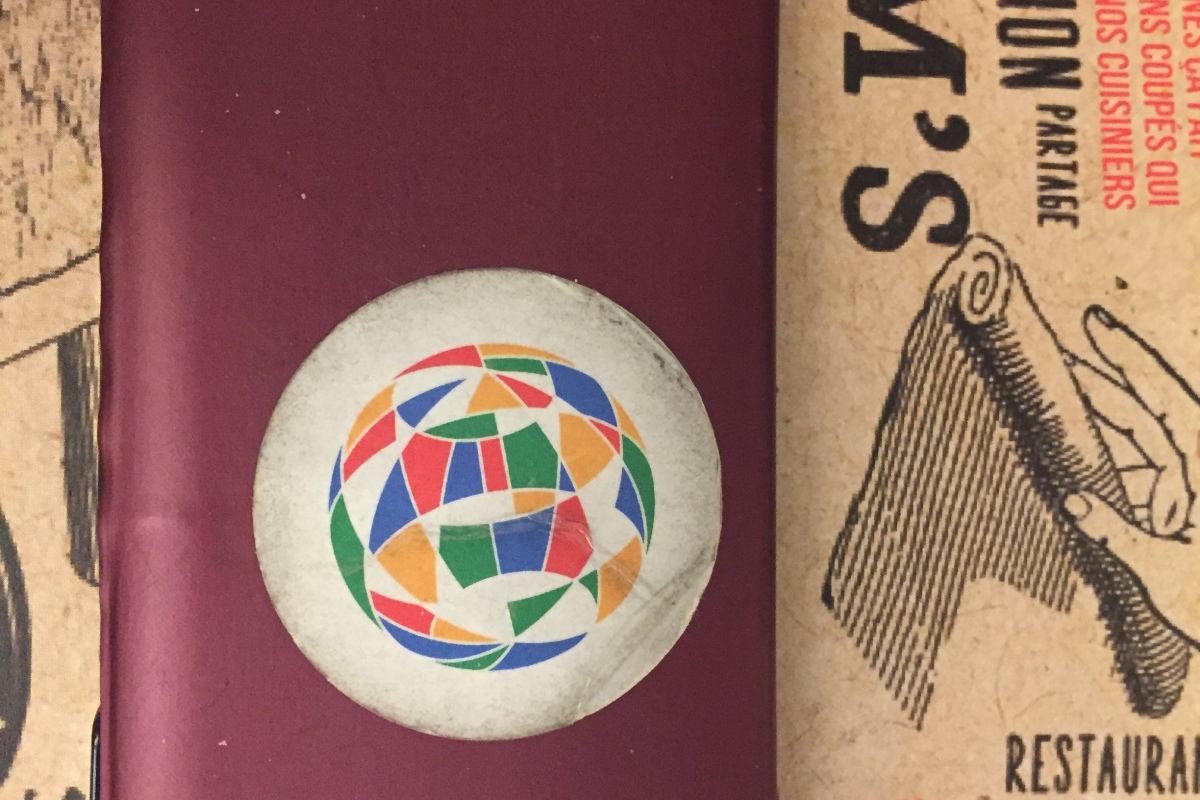 The picture for this blog is the back of Quentin Dumont’s phone on which is a well worn I-House sticker, which I thought summed up the continual presence of time spent at I-House even if people are not totally aware of it.

Hello Our restaurant for our Paris meet up, Flam’s was a great choice as we got to work our way through unlimited Flam’s (french version of pizza done on very thin pastry) which we shared trying all the flavours on the menu. It also turned out to have an I-House connection as the daughter of the owner of the chain of restaurants is a current I-House resident. We did not know this when a helpful alumna found it but it seemed to confirm it as the place for us to meet when Quentin shared this with us.

It has been some 10 years since there was last a gathering of I-House alumni in Paris. Towards the end of our evening Virgine Pez Perard found the photos of that dinner and there was amusement from Isabelle and Claire Lauper as they looked at their younger selves.

At the dinner we had I-House NYC represented from Quentin who left only last year to the Salomon sisters, Pat and Carole, who were there some 30 years ago.

We also had Pierre Gottraux who was flying the flag for ISH London and he had carefully bought along his GOAT (what ISH London alumni are called) reunion 50 years of ISH celebration bag to show us.

Isabelle was the donor of the Paris candle and being a gold star shaped one it was a great match for the silver one from my Roman friends. She had chosen the star shape to represent the stars and stripes of the USA.

Admission by TELEX – Pat Salomon – The parents of Pat and Carole Salomon were not willing to let one of them go to study in NYC alone, so Pat and Carole went together. They started and finished living at I-House NYC together, however their road to living a the House was a bit last minute. The time for them to go to New York was rapidly approaching and still they had no accommodation sorted. With only a week or so until their departure to the US, there was no time to write and there being no internet or fax the only option was to use TELEX. Luckily their father’s secretary was willing to help and sent a TELEX to the head of their future program at Columbia. He said he would see what he could do but would need more information, which was duly dispatched bit by bit over the wire. Finally practically as they were leaving Paris for NYC they got the confirmation that they would be accepted to live at I-House. When Pat arrived in New York she decide that they should thank the helpful gentleman from Columbia and so took a bottle of Champagne to him. Arriving to give it to him she asked why he had bothered to help her and her sister, to which he replied that he had seen they were French and as he had been in the US Army in WWII and had been the first allied soldier to arrive to liberate Nancy he felt a strong bond with the French.

A series of fortunate mistakes – Isabelle – Isabelle came to New York with a desire to learn and find work. Her paperwork made that difficult but despite that she gave French lessons to kids and worked in a variety of jobs whilst sub letting a flat. Whilst politely declining a nannying job from 5am until late in the evening each day to the mum who had offered it to her, she was connected to the father of the same family who it turned out would be willing to have her as an unpaid intern for a number of months. At around the same time a friend who knew of Isabelle’s challenges with her immigration status told her about the Green Card Lottery and encouraged her to apply. One of the places to do so was on Riverside Drive, however Isabelle did not quite get the address right and ended up going into I-House by mistake. Noticing the keys all hung up she wondered if this was an accommodation option (as her flat had come to an end and she was in need of somewhere to live). The resident manning the desk was not French but was learning French and was keen to practice so they fell into conversation. She explained that Isabelle could live there if she was a post graduate student or an intern, and so everything fell into place and Isabelle spent 18 happy months as a resident. One of the things that she took up whilst at the House was Ballroom dancing, which gave her continued pleasure for the next 20 or so years.

Giving and receiving – Clair Lauper – Arriving home after the dinner Clair sent me these three photos with the following explanation “coming to my door and fetching my keys to unlock it I smiled… the key ring is a gift I received from PS 306 (a school in the Bronx) in 1996 when I visited them with a group of I-House students to tell the kids about the countries we were coming from. A very poor neighborhood and really emotional memories from this visit… still have the drawings of the kids!”