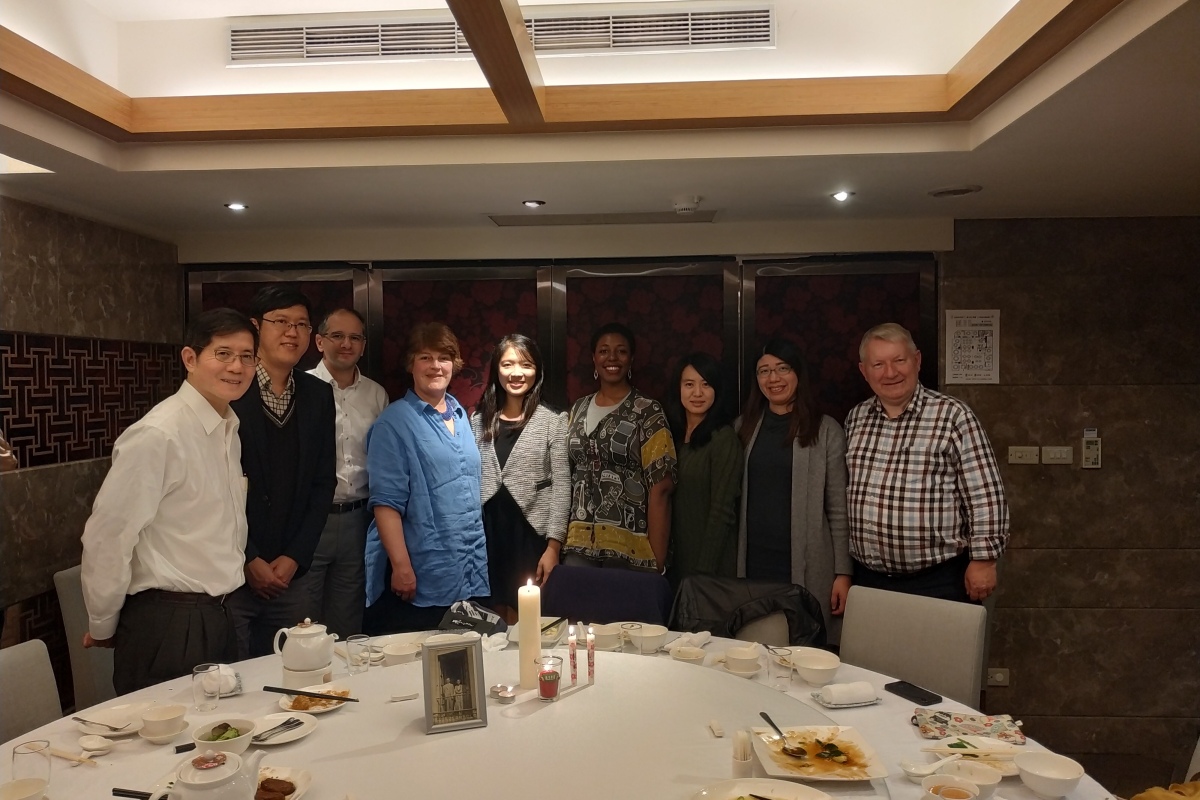 A combined set of I-House NYC and Berkeley alumni arrived around a huge round table in a private room in the Shin Yeh restaurant in Taipei.  The photo of Harry and Florence was placed in the middle of the rotating wheel on the table and so they watched over us and travelled around and around as we chose from the delicious dishes.

Only touching briefly on the Brexit fiasco in the UK and the US government shut down, we moved onto more enlightening discussion about time spent at I-Houses.  Music, dance, love and food themes wove through the conversations about both Houses.

We also pondered the challenge of the Houses keeping that magical diversity through careful admissions policy which as countries fortunes ebb and flow avoids one nation dominating the resident population and how vital dining discussion  were to building international friendships and understanding.

Grace Hong provided a very appropriate relay candle in a Taiwan Beer glass, which is suitably small as Kampai toasts require beer to be downed in one so the size avoids both getting drunk and over full. We lit the candles to pass the light on and said ‘Harry Edmonds’ whilst our group photo was clicked, and there was a sense that a combined Alumni Taiwan group had been formed that together would collect more friends for the next gathering.  We stood up to leave but conversation struck up again around the room in small groups, so it was sometime before we finally said goodbye….

Pub Disco Romance – Tudor Pasco – Tudor had enjoyed DJ-ing whilst doing his undergrad degree in France and so soon became a regular DJ feature in the Pub in I-House NYC.  He loved the breadth of music that was both appreciated and that he was introduced to.  From South American salsa, to Indian Bangra, to cheezy pop all could get the crowd on their feet.  It was over the DJ turntables that Tudor met his Taiwanese wife and became Sakura Sweethearts.  They now live in Taiwan with their 5 year-old twins.

Entrepreneurial Dreams – Jowy Tani – Jowy is a Consultant Neurologist.  Every year the Taiwanese government gives scholarships to 5 doctors to go to the US to study entrepreneurship for a year, in the hopes of making them more creative.  Gaining one of these scholarships at Berkeley, Jowy was faced with the decision of where to live.  He was thinking of renting an apartment, when he read something by Mark Zuckerberg which said that Facebook was started in a Dorm so he decided that he should go for the more creative and connected life of a Dorm and chose I-House for his year. As well as practicing in Taipei hospitals he is working on a variety of projects that will improve the lives of dementure  patients.

Food from home– Courtney Gates – Courtney’s memory of her first day at I-House is meeting the only Taiwanese resident in the House at that time.  Having recently returned from teaching English in a small town in Taiwan, Courtney was keen to strike up conversation with him.  Her new friend was also able to provide taste reminders of her time in Taiwan as, in his tiny I-House room, he was creating soya based drinks of his homeland.  A skill he passed onto Courtney.