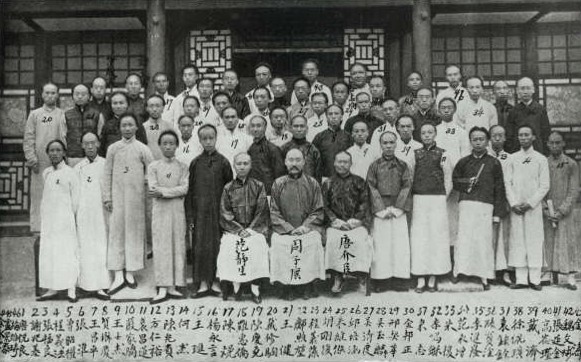 A few weeks ago I joined the Friends of I-House UK at their I-House London meet up and was lucky enough to meet Ping Shum an alumni of the NYC house who said to me that he thought we could find out more about the Chinese student who Harry met on the steps of Low Memorial Library that frosty September morning in 1909.  I was intrigued and was excited when an email came through from Ping that showed that only 47 Chinese students came to the USA in 1909 (pictured here before they left China)  via the Boxer Rebellion Indemnity Scholarship program and of those no more than 10 graduated from Columbia University and in fact there were probably only 4 or 5 that started there in 1909.

With the help of the Columbia Archivist and Ping, we are still on the trail of who the student might have been but we probably will never know exactly unless he told his family of the encounter with Harry, which is unlikely.

It did however bring a whole new perspective to the ‘lonely Chinese student’ story.  As whilst there would have been many Chinese people in New York at the time that there were so few Chinese students and made me think, like Harry did, about how we do or don’t welcome others to our country.

As I set off on my trip and for the most part am going to be meeting with strangers, I hold the thought that the strangers I am meeting have all had a common experience at an International House, which has made them more open and curious about others as a fellow human being. I know I will be welcomed.

In 1985 Gerald Ford spoke at I-House and said “Remember your convictions, respect the convictions of others.  Have faith in the decency of others.  Make the whole planet as full of friendship as this room is tonight.” (p106 Berkeley memoirs).  I am looking forward to exploring the planet of friendship….

2 thoughts on “The Chinese Student”